Are you a Jiminy Christmas or a Bah Humbug? As we prepare for our upcoming concert series “Unto Us a Child is Born”, we are doing a deep dive on some of the phrases synonymous with the holiday season.

Jiminy Christmas – “Jiminy Christmas” is a direct reference to Jesus Christ and dates back to 1664, when it was first recorded as “Gemini,” a twist on the Latin phrase Jesu domini. The name of the Walt Disney character Jiminy Cricket was probably based on this phrase.

Bah Humbug – The origin of the word humbug is unknown, though it is clear that it emerged in mid-18th century England. The first known use of humbug in print was in 1751 in The Student, or the Oxford and Cambridge Monthly Miscellany, which calls the term “a word very much in vogue with the people of taste and fashion.” The phrase is most famously used by Ebenezer Scrooge, the main, curmudgeonly character in Charles Dickens’s A Christmas Carol (1843).

Celebrate the lexicon of Christmas and join the MSM for Unto Us a Child is Born, December 14 & 15 at St. Joseph Chapel. 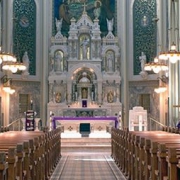